These Four Things: Illinois vs. Purdue

There are only two football games left this season -- THANK YOU, MERCIFUL FOOTBALL JESUS -- and if the Illini want to get at least one Big Ten win before it's over, this week is probably their best chance. So what do they have to do to get it?

Share All sharing options for: These Four Things: Illinois vs. Purdue 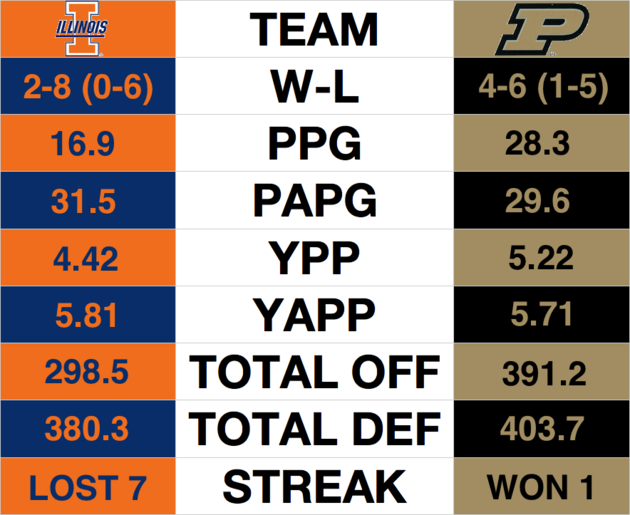 1. Protect Nathan Scheelhaase. This will be one of the four things from now until the time the Illini show they can actually protect Nathan Scheelhaase. So until the day after Nate graduates. The good news for the Illini is that they're facing a Purdue team that actually has a worse pass rush than it does, as the Boilermakers are averaging only 1.7 sacks per game. Now, this isn't to say that there aren't good players on this defensive line. Kawann Short is an absolute monster, but rushing the quarterback isn't his strength as much as stuffing the run.

However, it should be pointed out that Indiana was terrible at rushing the quarterback and the Hoosiers had a field day going after Scheelhaase.

Still, this is incredibly important. This offense has been absolutely terrible for damn near two months now, and it's never going to get better if Nate doesn't get any time and this line doesn't open some holes for its running backs too.

2. Open Some Damn Holes. The Purdue run defense is actually giving up more yards per game and more yards per carry than the Illini this season. Though that won't mean much if our offensive line continues to fail at opening holes for the running backs. With Nate making some bad reads of the defensive end in recent weeks on option plays it becomes even more important for the offensive line to block. And not just Kawann Short and company, as getting to the second level and taking out linebackers will be key too.

Getting to the second level will lead to big plays, and this offense needs big plays if it's going to put points on the board. It's shown us that it's not capable of putting together long drives.

3. Win On Third Downs. Most of what I've said in the first two keys will play a large role here. The reason this offense can't score is because this offense has been terrible on third down and forced to get off the field. The Illini have converted only 32.45% of their third downs this season. In Big Ten play that number drops to 27.78%. That's absolutely pathetic.

Now, we can make jokes about who is calling the third down plays, but the fact is that it doesn't really matter because the players aren't executing the damn plays anyway.

If there's reason to be optimistic that it could change this week it's that Purdue has allowed opponents to convert 41.06% of their third downs.

4. Defensive Points. A defense's best friend is a good offense and an offense's best friend is a good defense. Last week the defense played well enough, allowing only 17 points against Minnesota, but it was too many for this offense to deal with. I'm not sure much has changed on offense in the week between games, so in order to get a win not only will the defense have to force some turnovers -- Purdue has turned it over 21 times this year -- but it's probably going to have to score a touchdown as well. A pick six or a fumble return could be absolutely huge in this game.

Fornelli: I want this to be a game the Illini win. I see that Purdue is a 6-point favorite on the road in Champaign and it makes my head hurt. That's not a spread that should exist for a team that just won its first conference game of the season and had been getting blown out before that.

Unfortunately, it makes sense because as bad as Purdue has been most of this season, we have been far worse. And I don't see that changing this week. Purdue 24-10. (2-1 on the season)

U-God: Try as I might, I just can't not predict an Illini win in games they realistically have a shot at winning. Let's be the last nail in Danny Hope's coffin. His mustache will keep him warm at night. Illinois 17-14. (1-2 on the season)