The Day After: Wonderful Revelations About The Coaching Staff

The 17-3 loss to Minnesota was not the worst thing that happened yesterday.

Share All sharing options for: The Day After: Wonderful Revelations About The Coaching Staff

After Illinois lost 17-3 to Minnesota on Saturday I wasn't angry. I wasn't mad. I wasn't even disappointed. I wouldn't say I was numb, but I didn't really care either. That's just what happens when you no longer have any expectations and you accept the fact that you're watching a football program that is broken and isn't likely to be fixed in the near future.

I would get mad, though. Because not too long after the game was over I'd find out that this program was broken more than I realized.

It all happened when I saw this tweet from Jason Werner.

Holy shit, they're all stupider than we thought. Maybe we should find another coach to call plays on second down. No, wait, maybe we should let the fans call plays on first down. Just put four options on the scoreboard and everybody texts in their answer and the results are revealed to Nathan Scheelhaase in the huddle.

That'll improve attendance, and it'll also take heat off Tim Beckman because we'll have nobody to blame but ourselves. Oh, and the offensive line. And Scheelhaase. And pretty much everybody because everybody is terrible.

Now, while the coaches just continue to prove to us how stupid they are, at least for his part, Chris Beatty is taking all the blame for this offense being absolutely wretched.

He wouldn't let a porous offensive line take any blame.

He wouldn't blame Scheelhaase for fumbling or for overthrowing a wide open Jon Davis on a possible first-quarter touchdown.

"It ain't Nate's fault," Beatty said. "It ain't any one person's fault besides mine, so I got to do better, give these guys a better plan, call better plays and put them in better situations. That's my job. I'm not doing a good enough job of that right now."

We do have to do better, because it's hard for us to do much worse.

Of course, as we know, it's not all Beatty's fault. After all, the Illini went 4-for-14 on third down yesterday and couldn't keep drives going often enough. You usually find that's the case when you only manage a field goal against a team that came to town allowing 24.4 points per game.

But who is the most at fault? Isn't that what we really want to know? Well, lucky for all of you, I hate myself enough to dig through the pile of shit and figure it out. Assuming that Beatty called every first and second down play and Gonzalez called all third downs, I came up with this lovely chart for Saturday's game.

Now, by Negative Plays I mean any play that does not gain yardage, includes a penalty or ends in a turnover. As you can see, Beatty called nearly three times as many plays, but had less than twice as many negative plays. However, the difference in yards per play was pretty minimal.

So how do we decide whose fault this was? 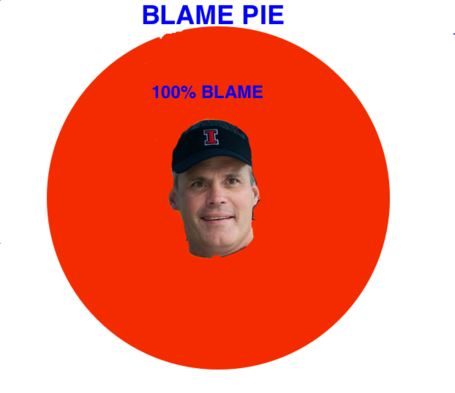 That's right, it's all Beckman's fault. He's the one who hired both and he's the one that decided having two different coaches calling plays depending on what down it is was a good idea.