Beckman has a history of running a lot of bad defenses.

I've tried to avoid the whole FIRE BECKMAN narrative that's already creeping through the fan base, and I'm also doing my best to not totally give up on the future. As I've said more than a few times on this blog already, we can't make any judgment on a head coach in only his first season with the program. It's not only not fair, but it's also ignorant.

But then with every loss I become less optimistic. That leads me to doing a bit more research into statistics, and then that only makes me feel worse.

And that's exactly what I've been doing with Beckman today.

Yes, Beckman had a bad first season at Toledo. Not bad in comparison to what we're dealing with here, but 5-7 bad. He then followed that losing season with two winning seasons and two bowl appearances. This is all well and good, but when you look at Beckman's career on the whole, it's not exactly encouraging.

Or more his lack of it.

Here's a quick chart I made of Beckman's previous stops before coming to Illinois and how many points per game the defenses he coached allowed while there. 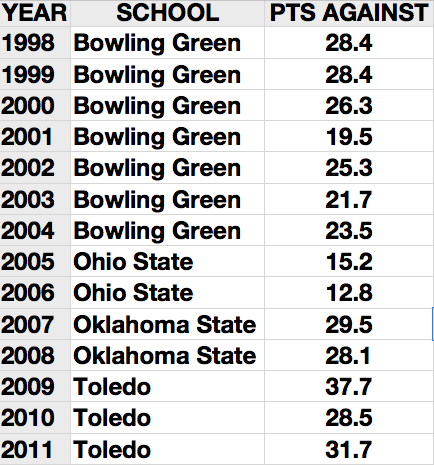 As you can see, it's not very impressive.

At Bowling Green, Oklahoma State and Toledo -- where Beckman was either defensive coordinator or head coach -- his defenses allowed an average of 27.38 points per game. Now, obviously, points allowed doesn't tell us everything we need to know to judge a defense, but it's a pretty good start.

After all, points are what determine the outcomes of games.

Looking at it from a yards per play perspective, though, doesn't change much. Unfortunately I could only find yards per play statistics going back to 2007, which was Beckman's first season as defensive coordinator at Oklahoma State. Here's what I found.

You're not feeling any better yet, are you? In those five seasons Beckman's defenses are allowing 5.69 yards per play. If you were to take his averages for points against and yards against per play, they'd rank 66th and 71st respectively in the FBS this season. Which is actually better than where Illinois ranks in both right now (88th and 75th).

Honestly, it's enough to make you wonder what Beckman did to get the head coaching job at Toledo. Did the school hire him just because he worked under Meyer, Tressel and Gundy? Because he was familiar with the state recruiting wise?

It certainly couldn't have been his defensive bonafides. We can see that clearly.

He's a defensive specialist that needs an offense capable of scoring 30 points per game to be successful. That's not a winning formula.

Hopefully these numbers will improve over the next few seasons, but I'm not nearly as optimistic that they will.