The Story Of Illibuck: The Most Interesting Turtle In The World

The story behind the turtle that inspired one of college football's most unique rivalry trophies.

Share All sharing options for: The Story Of Illibuck: The Most Interesting Turtle In The World

On Saturday Illinois and Ohio State will meet on the gridiron in a battle to determine not only the winner of a Big Ten football game, but also which school will lay claim to the famed Illibuck Trophy. The Illibuck is one of the most cherished trophies in all of college football, as many teams have longed for the chance to get their hands on it, but only the lucky few at Illinois and Ohio State ever have the chance.

What is the Illibuck Trophy?

Well, on the surface the Illibuck Trophy is a wooden turtle. On the back of that wooden turtle -- its shell -- the scores of previous games in the Illinois-Ohio State rivalry are inscribed. Though that's just the trophy itself. While its wooden shell can tell you the final scores of years past, what it cannot do is tell you the story of Illibuck.

But we here at The Champaign Room can.

After conducting numerous interviews and going over hours upon hours of audio tape, poring through old photos, The Champaign Room has been able to put together what it believes to be the definitive story of Illibuck. The most interesting turtle in the world.

Illibuck was born on a beach on the Galapagos Islands in 1825. At the young age of six he met a man by the name of Charles Darwin who was immediately drawn to the turtle because he seemed different from the others.

"I'm am particularly interested in one specific turtle," wrote Darwin in his journal. "While the majority of the majestic creatures seem to follow the same routine every day, and move around quite slowly, the turtle I call 'Illibuck' is just different. He seems to be a free-thinker. It's as if he's more advanced than the rest of the turtles. More evolved."

It was Illibuck's desire to be different that would eventually lead to him leaving the Galapagos Islands in the early 1900s. The date isn't clear, but those who knew Illibuck say he used an ocean current to travel north toward Central America. From there he would move north through Mexico and to the United States. 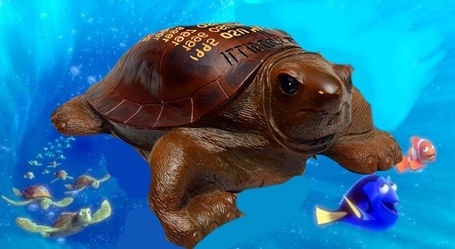 Like any immigrant to the United States, Illibuck made his way to New York City. Of course, unlike Irish immigrants or Italian immigrants at the time, Illibuck didn't have a cultural neighborhood to move into in the city. However, he would find compatriots under the city.

While living in the sewers of New York, Illibuck would meet a new family.

"Illibuck was an interesting turtle," says Raphael, a fellow turtle who Illibuck lived and fought crime with in New York for years. "He really cared about fighting crime because he believed in good, but he also wasn't really much of a conformist.

"I mean, I'm the one that's always been painted as the rebel in this group, but I had nothing on Illibuck." 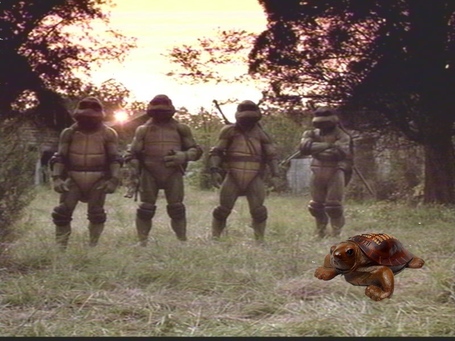 Fighting crime in New York would take its toll on Illibuck, however.

Leonardo speaks of a crippling drug addiction that Illibuck would develop. Illibuck eventually left the sewers of New York and his turtle friends to live on the city streets, chasing any high he could find. It was on the streets that a writer would see Illibuck every day on his way to work and would eventually be inspired to write a story about him.

The story was about a turtle that could just never get high enough.

Seeing his life mocked in print, Illibuck would leave New York to start anew and find people who understood him. It was traveling the country that he found a female turtle whom he would fall in love with. Her name was Lucille, and she lived at the Shedd Aquarium in Chicago. Lucille would help Illibuck get sober and the two would eventually marry and settle down to start a family.

Then tragedy struck the family as Lucille would develop a rare disease and died shortly after the marriage. Her death would send Illibuck into a rage. Drugs, alcohol, whatever Illibuck could get a hold of he ingested.

He would discover cocaine and PCP during this time, and found that the drugs gave him the ability to fly and shoot lasers out of his eyes while making him feel 50-feet tall.

This was terrible news for the Japanese city of Tokyo. 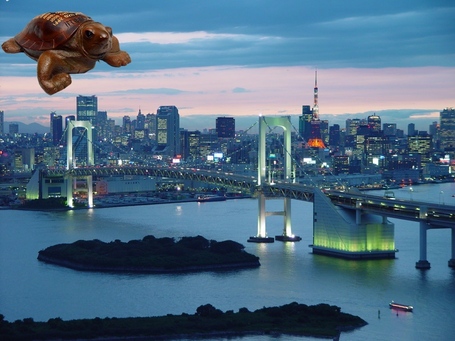 Eventually Illibuck would be chased off by Godzilla, but not before causing billions of dollars of damage in Tokyo and nearly starting another World War.

An international fugitive, Illibuck would seek asylum somewhere off the grid. While evading capture he came upon an undiscovered land known as The Mushroom Kingdom. This was a perfect place for Illibuck as it was not only off the grid, but it was a land filled with psychedelic mushrooms to help him forget about reality.

Which they did, but Illibuck was able to escape before he could be captured himself. 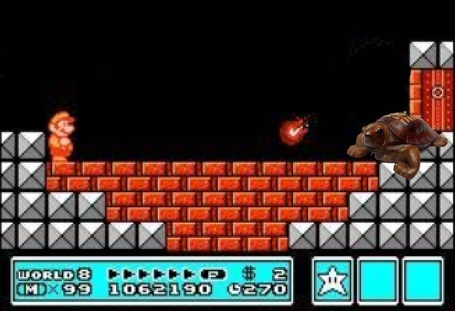 He'd return to the United States, finding solace in Columbus, Ohio. While in Columbus he would meet another turtle and fall in love again. Delores, his new love, was from central Illinois and was a big fan of the University of Illinois' football team. Having acclimated to life in Columbus, Illibuck had become a fan of Ohio State.

The "rivalry" in their relationship was one of many things that kept the relationship fresh. While they were madly in love, each relished the chance to hold a victory over the other's head.

And they would until Illibuck would pass away at the age of 150. Delores had a wooden statue made of her love so that she could remember him. Delores would die a few years later and the statue, with his name "Illibuck" inscribed on the back, would be discovered by an Ohio State student. Seeing the name of the turtle on the back, the student felt that this statue would make a great trophy for the winner of the annual game between Illinois and Ohio State.

Thus a tradition was born.

And that, friends, is the story of the most interesting turtle in the world.