These Four Things: Illinois vs. Indiana

A preview of this week's Homecoming game against Indiana and what the Illini have to do to pick up that first Big Ten win of the season.

Share All sharing options for: These Four Things: Illinois vs. Indiana 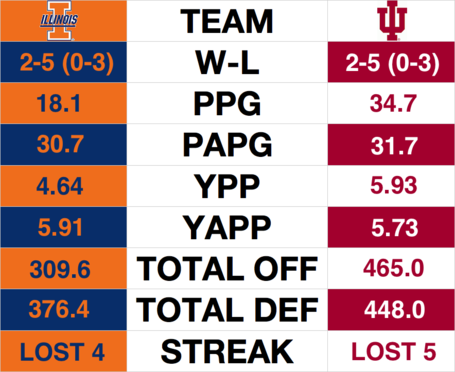 1. Take the lead. The last time Illinois led a football game was when it scored first against Wisconsin. As we know, things went downhill from there. Including that game the Illini have only held the lead for 13 of the 240 minutes they've played in their last four games. That's terrible and it needs to change.

If the Illini were to fall behind early against Indiana it's not hard to imagine this team quitting on itself. Confidence isn't high on this roster at the moment, and falling behind would only worsen that feeling. So it's imperative that the Illini jump out to a lead in the first quarter -- the earlier the better -- so they realize they're better than they've played and that this is a game they should win.

2. Run the football. Indiana is not a good defensive football team in any aspect, but it's particularly weak against the run. The Hoosiers are allowing an average of 226.29 yards per game (112th in FBS), which is a full 34.29 yards more than the next worst run defense in the league: Purdue. The Hoosiers are also allowing 4.90 yards per carry (96th), and have given up 15 rushing touchdowns (96th) on the season.

If ever there was a time for an Illinois rushing attack that has been terrible in 2012 to finally find some damn success, this would be the week. Donovonn Young and Josh Ferguson need to step up this week and perform so the onus doesn't fall on Nathan Scheelhaase to create offense with his legs. Nate's gotten banged up enough this season as it is.

3. Limit turnovers. An obvious one, for sure. Turning the ball over seldom works in your favor. However, limiting turnovers this week takes on even more importance considering our opponent. Not only has Indiana proven to be one of the better offenses in the Big Ten this season, but it's also the best at protecting the football.

4. Organization on defense. This will be of the utmost importance. Kevin Wilson has this Indiana offense running the no-huddle and running it well. And if that no-huddle attack can give Michigan State fits -- which it did for a full half -- it can do the same to us.

It will be important for the Illini defenders and coaching staff to have substitutions ready for all packages and situations in order to keep the defense rested and ready to stop this attack. It can be done.

Fornelli: I won't lie and say I'm not worried about this one, but I think I'm more concerned than I actually need to be. Illinois wins 31-27.